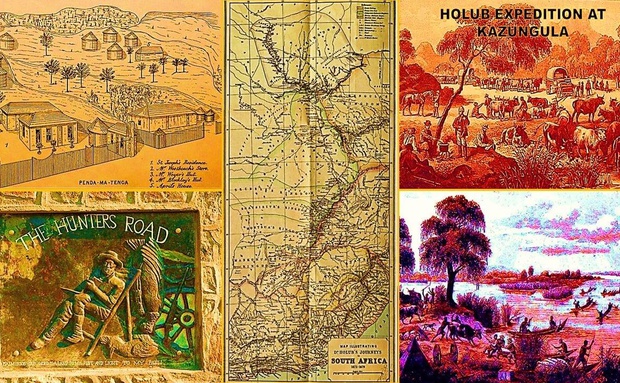 A classical Brief History of where we located.

From 1871 to 1888 trade with Malozi was largely monopolised by George Cobb Westbeech, along with such sometimes partners George Blockley and Benjamin Bradshaw. Born in England, by 1872 Westbeech had established his trading post at Mpandamatenga, where he was looked upon by the Malozi as their local induna. Westbeech’s success has been attributed to his ability to forge cordial relations with regional rulers, most notably the Amandebele King Lobengula and Malozi Kings Sipopa and his successor Lewanika. In the later court, he became known as 'Joros Umutunta', i.e. 'Great George', and was ultimately regarded by Lewanika as a trusted advisor. Between 1871 and 1881 Westbeech established the “Hunters’ Road” trade route from Tati/Francistown to Lesoma, along with a network of trading posts that in addition to Mpandamatenga included stores at Lesoma, Kazungula, and Sesheke in Malozi country. In 1881-82 Westbeech further extended his road from Lesoma to the banks of the Zambezi, terminating 27 yards east of a large Muzungula or Sausage Tree, a landmark which then stood about a quarter-mile east of the confluence of the Chobe and Zambezi Rivers. Before this development wagons from the south had generally stopped at Lesoma, where they were offloaded with their goods being portered to the river for crossing. The Hunters Road was subsequently used to demarcate the Botswana-Zimbabwe border. Westbeech died in 1888.

While most of the region's nineteenth-century European visitors were either British or Boers (Afrikaners), other nationalities were also represented. Prominent among the German explorers in the area were August Hammar and Aurel Schultz, who journeyed along the south bank of the in 1884. Detail of their journey can be found in their 1897 publication "The New Africa. A journey up the Chobe and down the Okovanga [sic] rivers. A record of exploration and sport.”

In the same year Dr Emil Holub, who had previously visited the region as a private traveller, arrived at the head of a semi-official 1884-86 Austro-Hungarian expedition. Accompanying him, in addition to his recently married wife, were six Austro-Hungarian military officers on furlough.

Dr Holub also brought a prefabricated metal pontoon, which had been supplied to him by the Austrian military. The boat had been
transported overland in three parts, before being assembled at
Kazungula. After first using it to travel to Mosi-oa-tunya, Holub sold the pontoon to Westbeech. Thereafter, it became the first metal vessel to serve as a ferry at Kazungula.

Previously ferrying in the area had been done exclusively by mekoro. The Kazungula Ferry continued to operate after Westbeech’s death. In 1907 Bechuanaland Police Captain Eason would thus observe that: “The first and only wagon road from Lushuma to the North is the present one said to have been cut by Westbeech, which follows down the valley to a spot on the right bank of the Zambezi opposite the village of Kazungula. This is about a quarter-mile below what appears to be the true junction of the Linyanti and Zambezi Rivers and is where the Kazungula Ferry has always been and is about 27 yds. East of a large “Mzungula” tree standing on the right bank of the Zambezi….”

As part of the imperial scramble for Africa between 1885 and 1890, the British and German pressed overlapping claims in the region. Their territorial dispute was settled by the wider 1890 Anglo-German Treaty which recognised British authority over Ngamiland and Chobe while conceding the Caprivi Strip to German South-West Africa.

Flights between Kasane and Johannesburg